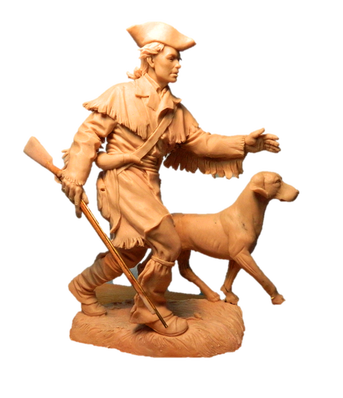 ﻿Jonas Cattell was born in 1758, on a farm called Lavender Hills. The farm was located just outside Woodbury, New Jersey, in what is now Deptford. While growing up, Jonas loved the outdoors and exploring the woods and trails in the area. He was known as a fast runner; in more recent times, he was listed in Ripley's Believe It or Not for hand-delivering a letter from Woodbury to Cape May and back, 160 miles, on foot, in two days. ﻿

At that time, a force of Hessian troops was camped in Haddonfield. Jonas was said to have been apprenticed to a blacksmith in Haddonfield, but had stayed there too late and was arrested by the soldiers for violating curfew. His punishment was to spend the night in jail until first light. During the night, Jonas overheard the Hessian soldiers discussing a surprise, early morning attack they were planning for the following day. They planned to march to Fort Mercer on the Delaware River and overthrow the American patriots who were stationed there.

Jonas Cattell was familiar with all of the back trails in the area. In fact, he was known to have created a number of the trails. When he was released the following morning, Jonas used those back trails and ran the ten miles from Haddonfield to Fort Mercer so he could warn the patriots. Thanks to his knowledge of the area, he arrived well before the Hessians. This warning allowed the Americans to strategically position themselves to defend their fort. Even though the American patriots were outnumbered by three to one, because they were able to prepare for the battle against the Hessians, they were able to defeat the Hessian and British soldiers, and to inflict massive casualties while suffering minimal losses within their own ranks.

Soon after the battle, Jonas Cattell enlisted in the American forces and served throughout the Revolutionary War. ﻿Following the war, he returned to Deptford Township and the outdoor life he loved. By the turn of the century, he served as master of the hounds for the Gloucester Fox Hunting Club, the first fox hunting club in North America. Jonas was well-known in the area throughout his life. He was said to wear a red flannel shirt, a heavy overcoat, fisherman's boots, and canvas leggings, and to always carry a gun and a tomahawk.

Jonas Cattell died on September 18, 1849, at the age of 91. He is buried in the Cattell Family Burial Ground, a tiny wooded grove in Deptford. The grave is located on Melvin Avenue, one block south of Caulfield Avenue.

The Jonas Cattell Run was started in 1969 to honor this great American hero, and takes place each year during Red Bank Battlefields 18th Century Field Day in October. The Jonas Cattell Run starts at King's Court in Haddonfield and finishes at Fort Mercer in National Park, New Jersey. The Haddonfield DAR Chapter presents a plaque to the first teenage runner to reach the finish line at Fort Mercer.
Read more Here and Here
FriendsofRedBank@gmail.com
google-site-verification: googlede1d6d3baf4436b9.html