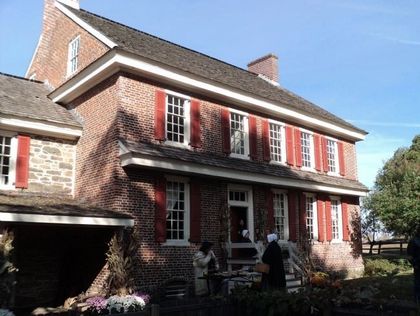 Along the Delaware River in an area just south of the city of Philadelphia on the New Jersey side, are 411 acres of prime farmland first settled by Jonas Treadway in 1688.

In 1700, Job Whithall purchased the property from Jonas Treadway and named it Red Bank plantation, because of the distinctive red clay banks on the Delaware River.

In 1722 James Whithall inherited Red Bank upon the death of his father. To the original 411 acres James added another 48 acres, making Red Bank one of the more influential land holdings in Woodbury township.

In 1739 James met and married Ann Cooper and they moved to Haddonfield, NJ, where they started their family. Their first son, James, was born in 1741, Benjamin in 1742, and Job in 1743. Their growing family made it necessary to find larger accommodations, so they decided to build a farm Manor at Red Bank on the land James had inherited. The site, close to the river,  already had a small, one story structure made of native stone built by Jonas Treadway in 1699 and an addition to the structure built in 1730 by James father Job Whitall.

James added to these structures and the home as it exists today, was completed in June of 1748. The home was built to serve two purposes. It was divided into two sections, one side for business and the other for living.

After moving in, James and Ann added to their family with the birth of Joseph in 1750, Hannah in 1752, Sarah in 1754 and John in 1757. They also had two other children who died early in childhood, but no record of their names exists. The Whitall's had a total of nine children.

The Whitall's had both a large family and a large number of servants, on average employing at least 12 to 15 servants at one time, most of them living in the house or on the premises. One Quaker custom that was considered odd for the time was that of everyone eating together at the Common Room table; elder family members, children, and servants alike.

Also of importance to understanding the way the Whitalls lived was the fact that a Quaker household was less male-dominated than those of other religious denominations of the day. Quakers spoke of "my father and mother's house."  The word Father might have come first, but both the husband and wife were afforded the same respect. This is especially true of James and Ann Whitall.

James was the consummate entrepreneur. He ran a thriving farm, with livestock and crops of corn and wheat. He had a substantial apple orchard, a shad fishery and processing plant, a lumber mill, and operated one of the few ferries in the area for crossing the Delaware River. James also oversaw other lands he leased to area farmers and was a main purveyor of dry goods, which were needed by the local inhabitants. In later years, his youngest son John became a sea captain, and he and his father did a thriving import/ export business.

James was a shrewd businessman for his time. But when the work of the day was done, he liked to enjoy himself and spend time teaching the finer points of being a country gentlemen to his boys. For a Quaker, James, was rather happy go lucky, and even took to fox hunting with his non-Quaker neighbors. He was known as a hard working, pleasant man and one of the most loyal and trustworthy in the County.

Ann, on the other hand, would be considered stricter and more serious than her husband, James. All of James's non-conformities to the Quaker faith, just added to her already troubled mind about his not attending more meetings.

Ann Whitall was known to have a mind of her own. She was known throughout the neighborhood for her vigorous tongue and her iron will.

While Ann was known as a cantankerous woman, she was also a good Quaker and a good person at heart. She may have spun gossip as well as wool on her spinning wheel, but no one ever faulted her good heart or willingness to help the downtrodden or sick in the area. If someone came to her for a handout she might preach to them with one hand pointed toward heaven saying, "Thou hath displeased God and thus been judged accordingly" while giving them a loaf of bread and a slab of meat with the other.